Land-taking, in the simplest of terms, is the act of procuring land and making it sacred. It is in the act of land-taking that mundane space becomes separate, enclosed and therefore becomes sacred– an innangeard.

Circumambulation as a means of land-taking occurred throughout Europe and continued well into the Christian era, albeit somewhat altered from its original form.  There are four main methods which were most commonly used by our ancestors as a means to take a space from the wilds; demarcation by fire, furrowing with a plough pulled by either oxen or horses, riding an ox or a horse around the perimeter of the space in question and the use of boundary markers (ribbon, posts/beams) to map the sacral area.

There have been several theories proposed as to why horses and oxen figure so predominantly in these land taking rites. In Celtic and Germanic culture the horse plays the role of pyschopomp, a conduit to the Otherworld and can be used to ward off malefic wights that may inhabit a place. It is for this reason as well that horses were the customary sacrifice during Germanic burial rites and were used almost exclusively as a means to reach the Underworld in Norse mythology. While oxen play less of a role as psychopompoi, they do have connection to the Gods and sacred ritual. In Germania, Tacitus refers to Nerthus’ wagon being pulled by two white heifers  and Pliny the Elder’s account in Natural History references two white bulls being used in the Celtic ‘ritual of oak and mistletoe.’

The wilderness, the ūtangeard represents primordial chaos, that which existed prior to the creation of the cosmos. The act of encircling and enclosing mimics the behaviour of the gods, creating order from chaos. When the wild place is cosmicized, malefic wights are driven away and the space can then be re-inhabited with beneficent wights- those numinous powers which conform to the laws of the innangeard. 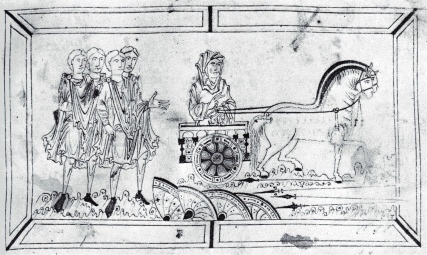 Claude Lecouteux, ‘Demons and Spirits of the Land: Ancestral Lore and Practices’

Claude Lecouteux, ‘The Return of the Dead: Ghosts, Ancestors, and the Transparent Veil of the Pagan Mind’